Source: Out of my face 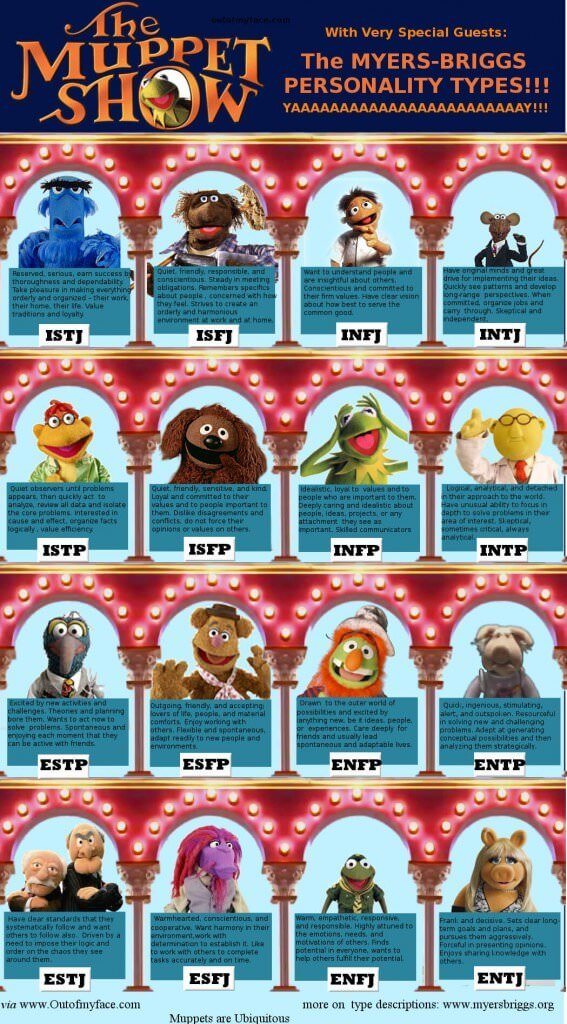 Everyone had a favorite Muppet, but have you ever wondered which Muppet represents your personality? Out of my face has divided different Muppet characters into 16 separate categories, detailing each personality to help you match up with the Muppet that is most like you.

ISTJ
Sam the Eagle is the Muppet representative of a studious, thoughtful person. The blue bird’s frowning countenance exudes the seriousness and stillness of a bird who has seen the world, found it lacking, and come to the conclusion that he is the only one capable of righting the world’s utter failure as a planet.

ISFJ
Beauregard the janitor is an unspecified creature representing openness and a jovial personality despite his lot in life. Beau is kind and comfortable in his skin, and his place in the Muppet world.

INFJ
Walter is one of the rare human Muppet, taking on the task of embodying the classic do-gooder. Walter is equated with making the best choices for the right reasons.

INTJ
Rizzo the rat and his hordes of family members are well-known in the Muppet world for implementing every scheme that occurs to them, and usually succeeding. Rizzo doesn’t give up, but powers on with an astute, yet complicated view of the world.

ISTP
Scooter is soft-spoken and considerate with a streak of genius. Representing the problem solver and logical thinker, Scooter keeps a level head while surrounded by the chaos created by his Muppet brethren.

ISFP
Rolf is the Muppet peacekeeper, sorting out disagreements with humor and good nature.

INFP
Kermit is the dreamer chasing the fantasy of a life charmed with rainbows and stardust. With his head in the clouds, Kermy is still the fierce protector of everyone he loves.

INTP
Dr. Honeydew cuts straight to the heart of the matter with concise logic and scientific backing.

ESTP
Gonzo is a fun-loving, fly-by-the-seat-of-his-pants Muppet who disregards patience and planning in favor of excitement and thrills.

ESFP
Fozzie is friendly, loving, and sensitive, particularly in times of trial and tribulation.

ENFP
Dr. Teeth emerges from another realm of thinking. He represents a new train of thinking, while maintaining loyalty and wisdom.

ESTJ
Statler and Waldorf require the world to adhere to their ideals, and if they are not obeyed, they will pepper the violators with insults veiled as jokes.

ESFJ
Clifford is mellow and caring, working toward being a team player who focuses on the needs of others.

ENFJ
Kermit’s nephew Robin only sees the good in others and does his best to support and nurture those around him.

ENTJ
Miss Piggy doesn’t take any guff, vocalizing both her displeasure and her triumphs with equal fervor.

Take what might be the world's shortest personality quiz (*). There are only 4 questions and it is absolutely free! For … END_OF_DOCUMENT_TOKEN_TO_BE_REPLACED

One of the favorite sections on our site is this collection of creative and often hilarious charts of each personality type. … END_OF_DOCUMENT_TOKEN_TO_BE_REPLACED